Who is at risk of developing myasthenia gravis?

Myasthenia gravis is not an inherited condition and does not usually occur in families. This is in contrast to the congenital myasthenic syndromes that are genetic conditions (see below). However, it is thought that a person’s genetic make-up is one of perhaps many factors that lead them to develop myasthenia gravis, and it may occasionally be found in more than one family member.

What is the prognosis?

The prognosis for myasthenia gravis has improved significantly with the introduction of immunosupressive therapy. Most people become symptom-free if they are adequately treated, however they do have to remain on tablets for life as the symptoms generally return if they stop the medication.

The majority of people with myasthenia gravis produce antibodies against a self-protein called the acetylcholine receptor (AChR). This is found at the junction between the nerve and the muscle (the neuromuscular junction (see figs 1 and 2). It acts as a ‘receiver’ for the chemical signal, acetylcholine that is released from the nerve when we want to use a muscle. The antibodies bind to the acetylcholine receptors on the muscle membrane and greatly reduce their ability to receive the chemical signal. As a result the patient experiences muscle weakness which becomes worse as they repeatedly try to use the same muscle. Although we now understand how antibodies to the acetylcholine receptor cause muscle weakness, we do not know why patients with myasthenia gravis develop these particular antibodies. In some cases, the thymus gland in the chest appears to be important in triggering the abnormal immune response. 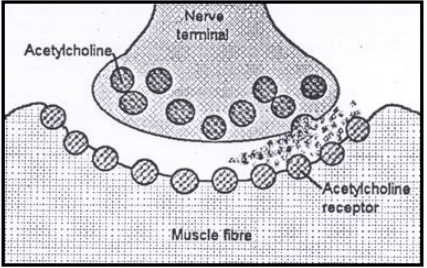 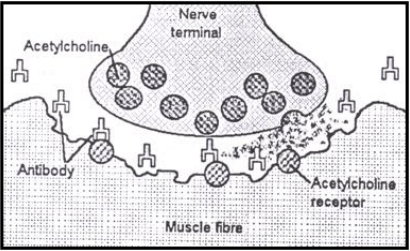 Tensilon® test, an injection of edrophonium is given, which results in a rapid but shortlived improvement in symptoms in many patients.

Chest scan should be done to check whether the thymus is abnormal as many patients with myasthenia gravis have an enlarged thymus, and some have a benign tumour.

What will the doctor do?

As myasthenia gravis is rare, the general practitioner (GP) usually refers the patient to a specialist neurologist for further assessment and tests, and for initiation of treatment. Once the diagnosis has been made, the GP has a very important role in prescribing and monitoring the medication.

What else could it be?

What other conditions can be mistaken for myasthenia gravis?

Some will have the Lambert Eaton myasthenic syndrome. With this condition, people are also weak and fatigue easily, but eye symptoms are less common. About half are smokers and a particular type of lung cancer may be found.

Antibodies to another neuromuscular junction protein, the voltage-gated calcium channel, cause the condition. Treatment is similar to that for myasthenia gravis but thymectomy is not performed. There are also rare congenital myasthenic syndromes, caused by hereditary gene mutations in the acetylcholine receptor. Antibodies do not cause these and thymectomy and immunosuppressive drugs are not used.

Can women with myasthenia gravis have babies?

Many women with myasthenia gravis develop the condition as teenagers and it is well controlled before they want to have children. The symptoms sometimes get worse during pregnancy but equally often get better. Sometimes the baby is born with a transient form of myasthenia gravis, owing to the transfer of antibodies across the placenta, but these symptoms respond well to treatment and usually disappear within days or weeks and cause no permanent disability. On very rare occasions, where a mother is untreated, she may give birth to a baby with severe symptoms, (including joint deformities) requiring intensive care. This has never been reported in a mother who has been diagnosed and adequately treated for myasthenia gravis.

The first specific form of treatment is anti-cholinesterase drugs (usually one called Pyridostigmine), which prevent the breakdown of acetylcholine and so improve the efficiency of the chemical signal at the neuromuscular junction. The benefits of Pyridostigmine occur within 30-60 minutes, but wear off in three to four hours, so tablets should be taken at regular intervals throughout the day. People may develop colicky abdominal pain and diarrhoea on Pyridostigmine because the medication also increases nerve and muscle action in the intestine. If this occurs, the dose can be reduced, or alternatively Propantheline can be taken 30 minutes before each Pyridostigmine dose to counteract the effects on the bowel. For some, myasthenia gravis symptoms disappear with Pyridostigmine alone, but most require additional treatments, which vary from person to person.

Since the thymus can be abnormal in people with myasthenia gravis, surgical removal of the thymus (thymectomy) is recommended for some. Following thymectomy, symptoms do not usually improve in patients with a thymoma, but may improve in young patients with an enlarged thymus. In these patients, about one in four is cured by thymectomy, two in four have significant improvement, but one in four does not improve. Improvement following thymectomy is usually apparent in the first year, but may take up to three years. If the patient recovers, or improves significantly following thymectomy, then they may not need any additional therapy. But many will need further treatments.

If a person is very weak or having trouble breathing or swallowing, then they are usually admitted to hospital for more aggressive treatments such as plasma exchange or intravenous immunoglobulin (IVIg). These treatments can produce a rapid improvement in symptoms but the benefits only last for about six weeks. They are reserved for situations when symptoms need to be controlled quickly, and they are not appropriate long-term treatments.

What can people do themselves?

It is important for people to use common sense and avoid things that would put them in danger if their weakness suddenly increased (for instance swimming on their own). Taking medications regularly is the key to maintaining the lowest possible levels of symptoms.