Download factsheet
Every human has 23 pairs of chromosomes that contain DNA. FSHD is caused by a genetic mutation (sometimes called a ‘fault’) that removes some of the DNA on chromosome 4.

This chromosome contains lots of repeated pieces of DNA called D4Z4 repeat units, arranged like a train of identical carriages.

In someone with FSHD, the number of D4Z4 repeat units is reduced, like a train having too few carriages. This causes a gene called DUX4 to be unnecessarily switched on and produce DUX4 protein. DUX4 protein is thought to contribute to muscle wasting, inflammation and damage inside the muscle cells of someone with FSHD.

Scientists are trying to find out more about the function of DUX4. This will lead to a better understanding of FSHD and will help in the development of potential treatments.

To some extent, knowledge of the number of D4Z4 DNA repeats can indicate how severe the condition is and how it is expected to progress. 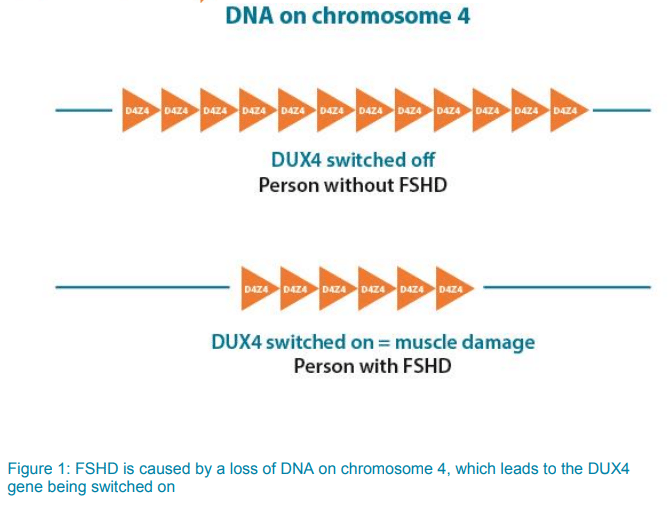 How is FSHD inherited?

In FSHD, one copy of chromosome 4 is faulty. Hence there is a 50:50 (one in two) chance of each child of an affected parent to inherit the faulty copy, resulting in FSHD. The children also have an equal chance of inheriting the good copy (resulting in no risk for these individuals or their future children having FSHD). This pattern of inheritance is called ‘autosomal dominant’. For more information about the pattern of inheritance, please see our Inheritance factsheet.

Is there always a family history of FSHD?

It may be that there is a family history that had not been recognised before. This could be because the symptoms of other family members had been very mild, or they had been misdiagnosed.

In some cases where FSHD develops in young children, who appear to be the first ones in a family, one of the parents can show the same FSHD mutation in some of their cells but not in others. This situation in the parent may not give them any symptoms. But this does mean that further children of theirs would potentially be affected. It’s recommended that both parents provide blood samples for DNA study if they wish to know whether future children are likely to have the condition.

In other cases, genetic testing may determine whether or not a young adult is affected. Family members or couples seeking further information should ask for a referral to their local Clinical Genetics Service.

Are men and women affected equally?

On average, men with FSHD tend to show more weakness and from a slightly earlier age than women. The reason for this is not yet clear. Within large families, and excluding the most severe cases, women are more likely to be less severely affected and could be unaware they have inherited the condition. By the age of 30, nearly all males with FSHD show symptoms, but only two-thirds of females do.

Will all family members be affected equally?

Children inheriting the faulty gene are likely to be affected from a similarly young age and at least as severely as their affected parent. In large families, daughters with FSHD might be less severely affected than their fathers.

The age when symptoms begin, and the severity of FSHD seem to relate broadly to the number of D4Z4 repeats on chromosome 4. This usually remains fixed within a family.

Therefore there will be some families where FSHD will always tend to be quite severe and others where it will always be relatively mild.

Some people (particularly men) with average or mild presentations of FSHD, may, if they are the first cases in a family, have a mixture of normal and FSHD-type cells. Their children, who will inherit the FSHD mutation in all their cells, will develop signs of FSHD earlier and more severely.

The age at which FSHS becomes noticeable is dependent on the number of D4Z4 repeats on chromosome 4. Generally, the fewer D4Z4 repeats, the earlier the age when FSHD starts and the greater the severity.

If I have no symptoms, can I still carry the genetic fault and pass it on to my children?

If the person has been affected from childhood, it is very unlikely that an adult relative (say a brother or sister) who is unaware of any symptoms, could ‘carry’ the faulty gene or pass the condition on to their children. The parents of the affected child are an exception, as they could be ‘carrying’ the mutation but in only some of their cells. They could pass the condition on to more than one child.

For people from families where several relatives or a parent have FSHD, DNA testing is the only way to find out if they too are carrying the faulty gene. In these situations, many people potentially affected may be affected only mildly, and are unaware of the signs that would show a specialist they have FSHD.

Up to one-third of women carrying the milder mutations for FSHD, and a probably much smaller proportion of men, may not show any definite signs of the condition. Therefore, the answer to this question can only be given reliably by DNA testing.

Can one of my children have inherited FSHD and another not?

If the apparently unaffected child is several years beyond the age at which the affected one first presented with symptoms, it is likely that they have not inherited the condition.
This is particularly so if:

However, if either parent is affected or carries the mutation, the only way to be sure is to have DNA testing. If a child has no signs of FSHD, requests for DNA testing would normally be refused until they are of an age (16 years old in the UK) to choose this for themselves. Is there any way of not passing the faulty gene on to my children?

Accurate pre-natal testing, performed by chorion villus biopsy (CVS) usually at 11 weeks pregnant, is now available to find out if the faulty gene has been passed on. (For more information, please see our prenatal testing and diagnosis factsheet). Couples considering CVS, should get in touch with their local genetics service.

Alert cards are conveniently shaped to fit inside a wallet and outline key recommendations and precautions that a non-specialist clinician would need to know during a time of worsening health.