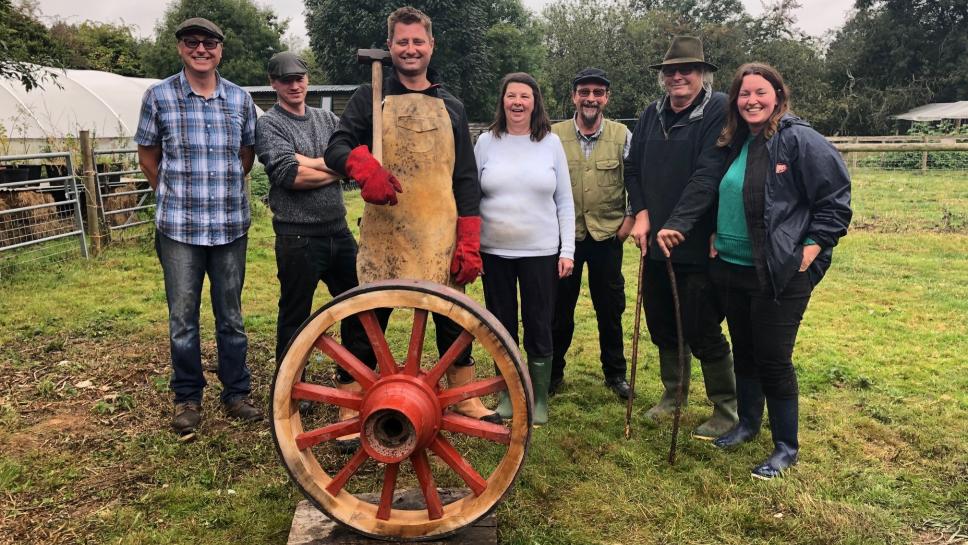 On this year’s Rare Disease Day, Sunday 28 February 2021, we are showcasing the achievement of master craftsman Paul Tomlin and his amazing, traditional building skills. He has coped with the weakness caused by his extremely rare form of muscular dystrophy to construct a beautiful old circus wagon.

Paul, 66, was diagnosed in August 2017 with a form of muscular dystrophy, myofibrillar myopathy, (myotilin 1a).  It is an ultra-rare, genetic condition, which causes debilitating weakness in his arms and legs, and it can also affect the heart.

With help from family and friends, he overcame his extreme fatigue and vulnerability to cold, to devote 10 months to renovating a 19th-century circus wagon back to its former glory. He recently completed the work, and was featured on Channel 4’s George Clarke’s Amazing Spaces.

Having this rare condition is like trying to operate the body of a grown-up with the tiny muscles of a child and it is totally exhausting. One is constantly having to adopt new coping mechanisms for living on a daily basis as the disease progresses. Staying mentally strong and positive can be one of the biggest challenges and cannot be underestimated.

His renovation journey began in August 2017, when he bought the rotting wagon, which had been in a leaky shed for 40 years on the North Norfolk coast.

Described as a legacy project for his family, Paul’s wagon would have originally been a pantechnicon, used in the late 1890s to transport circus and fairground tents and equipment around the country. Like similar wagons of that type, it was turned into living accommodation in the 1920s.

He had to totally rebuild the structure of the wagon and make it habitable inside, with a traditional built-in bed, wood burner, compost toilet and a jacuzzi recessed into the flooboards. Paul and his son Dan cleaned and repaired the rusty old metalwork and, where necessary, created new in the farm forge. He also had to rebuild all four wooden cart-wheels. This is the latest episode in Paul’s colourful career, which includes having been being Head of the Cabinet and Joinery Workshop at Blenheim Palace.

The project caught the attention of the TV production company that produces Amazing Spaces for Channel 4. They interviewed Paul and broadcast his achievement on 14 January 2021.

Paul decided to contact MDUK after the filming had finished, as he saw an opportunity to draw attention to and raise awareness of muscle-wasting conditions and to make others aware of the support available to them. He shared his story on our website after the programme aired.

We were absolutely delighted to see Paul’s impressive circus wagon renovation. It was great to see Paul, who lives with a progressive muscle-wasting condition, complete such a physically gruelling task, with the help of his family and friends.

MDUK is here to help everyone living with a muscle-wasting condition like Paul’s. We help people to get the equipment, services and financial assistance they are entitled to. We can put people in touch with someone who knows what it’s like to live with muscle-wasting conditions. And our Support hub shows people support and services near them, including specialist teams and neuromuscular Centres of Excellence.

MDUK is the only charity that supports people who live with any one of 60 muscle-wasting conditions, all of which are rare or ultra-rare. Last year, over 25,000 people called our helpline, seeking advice and support.

The UK Government and the devolved administrations have published a new UK Rare Diseases Framework, which aims to build on the UK Strategy for Rare Diseases launched in 2013 and MDUK engaged in a National Conversation on Rare Diseases survey in October 2019.

With the generous support of people such as those who support our Special Events like the Microscope Ball and Charity Shoot every year, we were able to continue this essential service to our community during the pandemic, when the charity faced a £2.8 million loss in income. You can follow and join the conversations on social media for Rare Disease Day 2021, on Sunday 28 February - the hashtag will be #RareDiseaseDay and our Twitter handle is @MDUK_News.