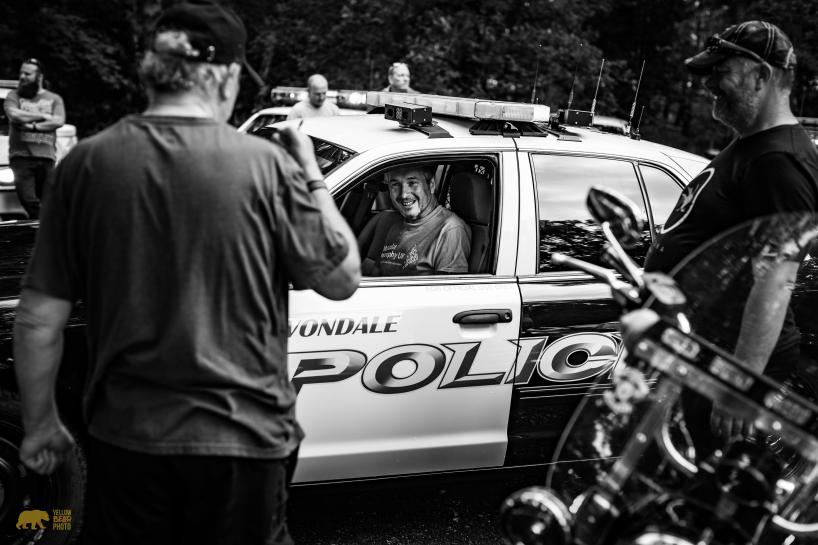 Rory Duncan literally fell in love with the vehicles after seeing them on a holiday in Las Vegas.

After buying a NYPD Ford Crown Victoria police car, he set up the American Police and Service Vehicles Club in 2016, to create a community for people who shared his unusual interest in shipping American police cars to the UK.

I think most people just enjoy the cars from watching various movies and films. They are all genuine ex-American police vehicles and we're also lucky enough to have some genuine New York taxis as well. Their value is between £6,000 and £12,000 each, which includes the expense of bringing them over. If we're using the cars for doing weddings, proms and official shows, then we will 'uniform up' to really bring the cars to life. We go to painstaking lengths to get the correct uniform, badges and patches.

Rory’s connection to MDUK is through Michael Fagan, who was diagnosed with limb girdle muscular dystrophy in 2012. He worked until 2016 as a plumber and gas heating engineer.

Michael, who is still able to drive, absolutely loves his Avondale police Ford Crown Victoria car, which came out of service in about 2018. He has ‘shown’ it to raise funds and awareness for MDUK. The livery has been re-created so it looks exactly how it did in service. At a recent USAF base show, Michael was even able to meet with a former councillor from Avondale, who also gave him some police patches on behalf of ‘The Chief’!

Fundraising for MDUK started in 2020, when Rory jointly organised the largest (43) gathering of American police vehicles in the UK, in Suffolk.

I learnt how to video-edit as a result of all the video footage. I started selling the videos on USB sticks to members, as souvenirs of the day, with all profits going to MDUK. I then created wall calendars in 2020 and again in 2021, with photos from our meetings.

He sells the calendars on eBay and to members of the group. So far, the American Police and Service Vehicles Club has raised over £250 for MDUK through three small campaigns. Their future plans include releasing the police car show video on Blu-Ray/DVD.