Dad takes on skydive to fundraise for Muscular Dystrophy UK 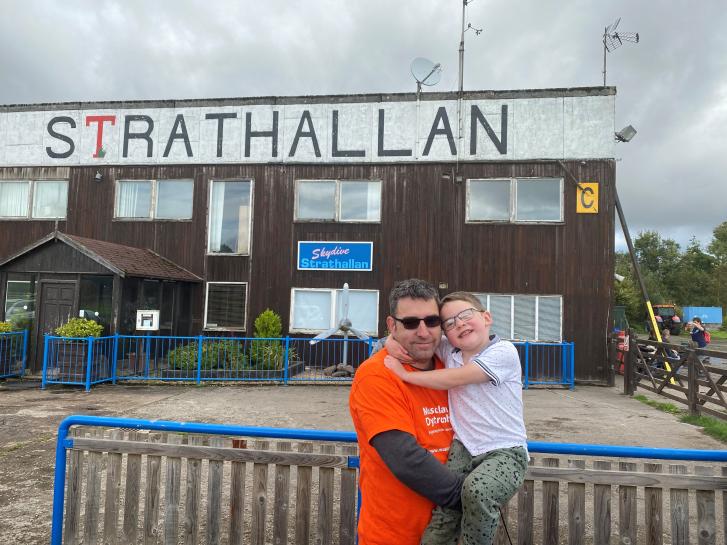 Joseph Moan has been blind from birth. When their eldest son Jack was diagnosed with Duchenne muscular dystrophy in November 2019, he and his wife Nuala decided they would not allow Joseph’s blindness to stop them fundraising to find a cure.

So on Sunday 12 September, Joseph took on a skydive at the St Andrews Skydive centre, in Glenrothes. It was postponed several times and when he finally jumped he raised over £1,000 for MDUK.

He said doing the skydive was a real adrenaline rush.

I can’t wait to take to the skies again sometime in the not too distant future.

The skydive is the latest fundraiser for the family from Polmont, who took part in MDUK’s Go Bright for the Fight this February when they persuaded Jack’s entire school to wear bright colours for a day – raising an incredible £1,205.

Jack was a toddler who didn’t always meet the milestones expected. He was delayed in being able to sit independently and was unable to walk until after his second birthday. We had many trips to doctors and hospitals to try and find out what was holding him back. My partner Nuala and I discussed it many times over the years, and both agreed that it didn’t matter how long it took for Jack to be able to walk because once he achieved it, that would be it for ever.

Unfortunately we were wrong. In November 2019, we got a diagnosis for Jack of Duchenne muscular dystrophy. For the most part, Jack is a happy, fun-loving, cheeky and mischievous young lad. He tires easily due to fatigue, and he tries to keep up with his brother and peers, which can be difficult for him.

We as a family have adapted to Jack’s needs and capabilities but life in general cannot adapt to Jack. We will do all we can to help him through life’s stages.

Joe said that Jack will be in a wheelchair by the he time he reaches high school. The family gets out and about as much as possible so that Jack can have as many experiences as possible.

For Joe to do a skydive is so impressive. Thanks to friends and family support, he has more than smashed his £399 target. I hope others will want to support him here.