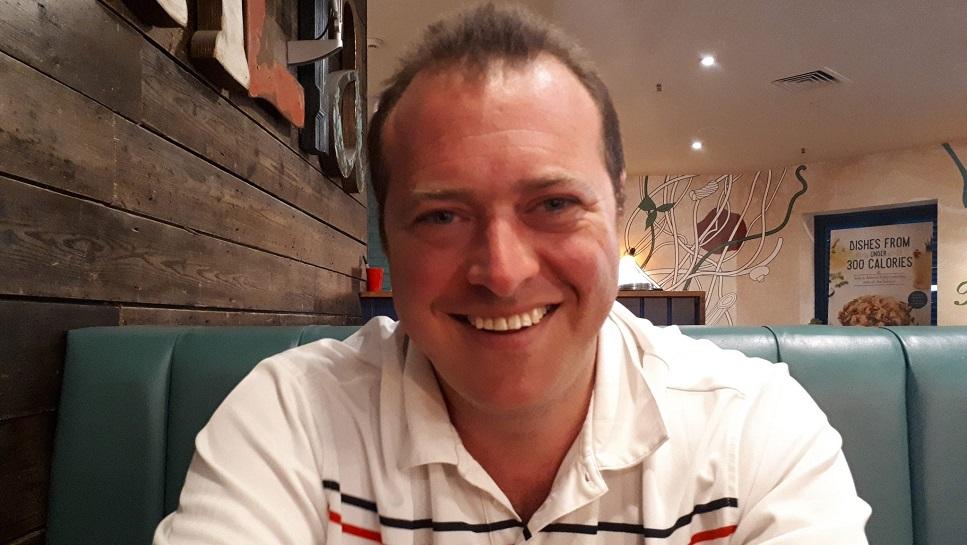 Peter Neville, 41, from Newmarket, has Charcot-Marie-Tooth disease (CMT). He and his partner Tracie say that they volunteer for Muscular Dystrophy UK at the Cambridge Town and Gown 10k run because they want to “give something back” after receiving support from the advocacy team.

“I was diagnosed with CMT in February 2016. I went to the GP with what I thought was carpal tunnel syndrome years ago and had an operation for it, but I carried on getting the symptoms. I got sent to Addenbrook’s hospital for tests and then I was sent to a neurologist, who said to me straight away that she suspected I had CMT.

“Looking back, I had all the classic symptoms before, but I’d never picked up on them. I was always clumsier than everyone else as a child. The neurologist later confirmed it was CMT.

She told me that it wasn’t life-shortening but it was life-changing, and suggested that I speak to Muscular Dystrophy UK straight away for help. I called the advocacy team, who advised me to take things one step at a time and told me what they could to for me. They managed to get me a neuromuscular care assistant and an occupational therapist, which really helped.

“There has been a significant deterioration in my condition since then. Things sped up quite quickly over the last 12 months. I used to do a lot of fishing and I find it much harder to do now because my mobility is more limited. I had a manual car but I’ve had to change it for an automatic because it was too painful to drive.

“I stayed in contact with the advocacy team, and they wrote to the housing association when we needed a new place because there wasn’t enough room for a stairlift where we were living. It’s great to have that support there for you on the whole journey, from the moment of diagnosis to dealing with problems that come up later.

“My partner and I volunteered at last year’s Cambridge Town and Gown as marshals because we really wanted to give something back. It was a very emotional day. There was a child participating who was blind and was running with his carer. When you see something like that it makes you realise how giving people can be. I can’t run, and he can’t see, but there he was there raising money for people that he wanted to help.

“People could see me there in the wheelchair and I think it made them realise how much what they were doing was helping people like me. It was a really good atmosphere. We’re looking forward to doing it again this year – I’m just hoping it doesn’t rain!”