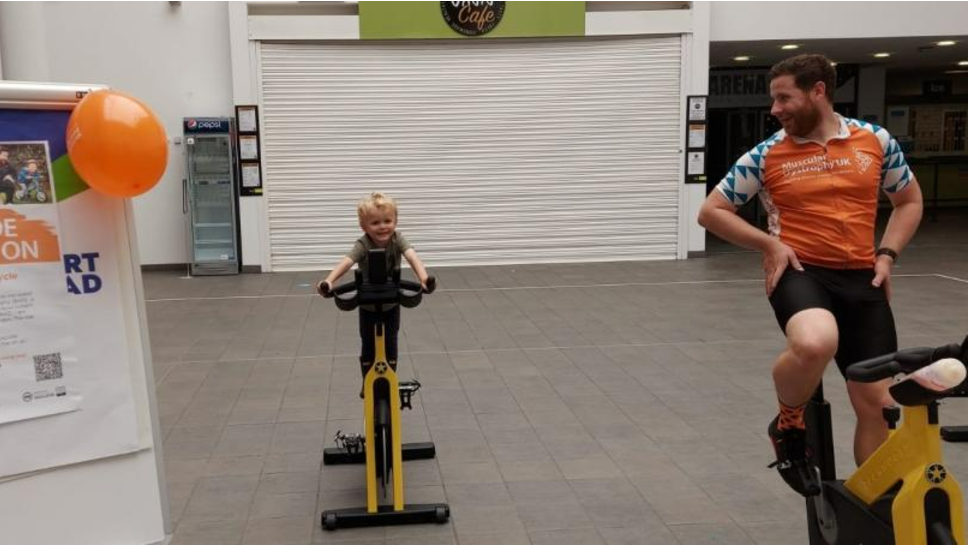 Paul, 35, is a fitness instructor and personal trainer from Stockton-On-Tees. He has two children of almost identical ages to Henry and his brother Elliott. He is doing the huge cycle ride to show personal support, and to raise funds for vital research into finding treatments. He said,

Keith and I have been friends since going to nursery together. I had the idea one night while I was putting my son to bed. When I found out the central London location of Muscular Dystrophy UK's offices, I instantly knew it would be the perfect event. I roped in close friends Johnathan Munkley, Andrew Elkins and Pete Outwin, and it was set in stone!

Henry is one of about 2,400 males in the UK to be affected by this very rare condition. Although there is great variety in how it develops, he will gradually begin to lose the ability to do things most of us take for granted, such a jumping walking climbing stairs, running with friends and even simple things like brushing his teeth.

They are training hard because Paul had only ridden a road bike twice before planning it. He hopes to complete the mammoth ride in about 20 hours.

I am excited, nervous and every other emotion in between. I am under no illusion that it will be an easy task to complete but I just know that every penny raised will be worth the effort. This may sound strange to most but the physical and mental effort involved is probably what I am most looking forward to. Starting and ending the ride in the dark will add a different dynamic to the challenge as well.

He added that he is not looking forward to having to be awake and exercising at 4am!

Navigating our way down the country will also be a challenge, especially because my first attempt at planning the route has suggested taking the A1

This is an incredible challenge, to ride 260 miles is impressive but to do it in one day is on another level! We are so grateful to Paul and the team for supporting the charity.