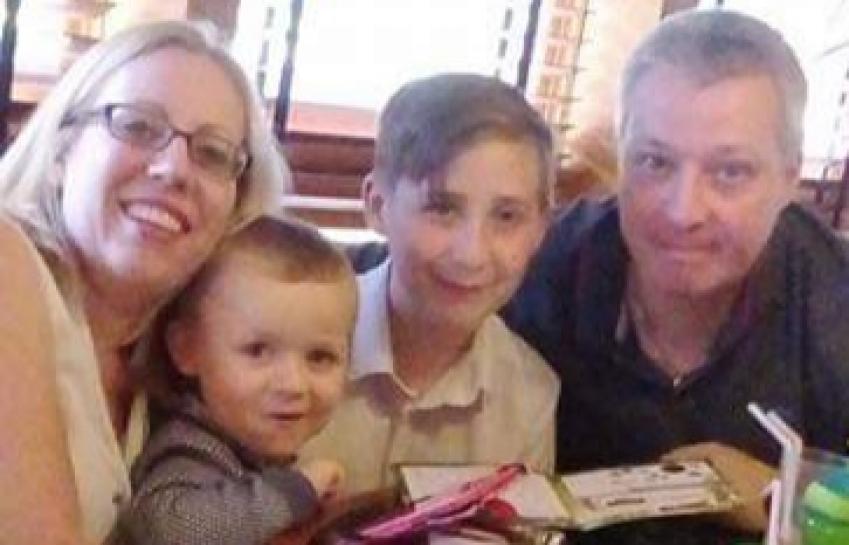 Danielle Malkin and sons Theo and Jenson all have the condition.

A mum is calling for greater awareness of Charcot-Marie-Tooth (CMT) disease after only being told she had the condition following her son’s diagnosis.

Danielle Malkin, 38 and from Stoke-on-Trent, in Staffordshire, was always labelled as a “clumsy” child. Her mother was told she was being neurotic and that Danielle’s tip-toe walking was simply part of growing up.

As a child, Danielle underwent Achilles tendon lengthening, was given pedro boots to wear and had annual reviews with an orthopaedic surgeon until she was 16. At this point, all involvement with health professionals stopped

After Danielle gave birth to her first son, Theo, she noticed he wasn’t meeting key milestones as he began to grow.

He displayed tip-toe walking, had claw feet and high arches. After being referred to a paediatrician who ran blood tests and MRI scans, Theo was given a diagnosis of CMT in 2004.

Doctors then decided to run some tests on Danielle, and she also received a diagnosis of the condition.

“In that moment, I was finally given some clarity."

CMT is a hereditary condition that affects the function of the motor and sensory peripheral nerves, leading to weakness and wasting of the muscles below the knees and often those of the hands. The condition often varies enormously in severity, even among members of the same family.

It is estimated that around 25,000 across the UK have CMT, although many people have not heard of it.

That rings true for Danielle. She is hoping that CMT awareness month, which takes place every October, will help to educate more people.

Jenson, Chris and Theo on holiday[/caption]

In 2012 Danielle fell pregnant with her second son.

I explained to my midwife about my CMT diagnosis and she looked at me blankly.  She did refer me to a genetics clinic who offered to tests to see if he carried the CMT gene. I declined this as my husband Chris and I would love our baby regardless of whether he had CMT or not.

The couple’s second son Jenson was born and diagnosed with CMT when he was six weeks old.

While Theo and I both have high arches and are tip toe walkers, Jenson has flat feet and doesn’t tip toe walk. It just shows that although people can have the same condition, you can have different symptoms.”

Danielle has expressed frustration at constantly having to describe her condition to medics and how it affects her.

“I get so fed up of meeting health professionals and having to explain what CMT is. I try my best to share as much information as I can with them so that they have an awareness.  I carry the MDUK diagnosis cards with me so that I can show health professionals.”

It’s not just medics that Danielle wishes had greater awareness of CMT, but the wider public, too.

“The fatigue I get just from walking is ridiculous. I try to avoid the shops as I can’t cope with standing in queues and fighting my way through town so I either shop early or online. I have noticed that as I am getting older that it feels as if I am dragging my body around more.”

Danielle describes CMT awareness month as “fantastic” in raising awareness of the condition.

Muscular Dystrophy UK held a seminar on CMT disease, joined by experts who discussed progress in research and potential future treatments for the condition. You can watch the recording.