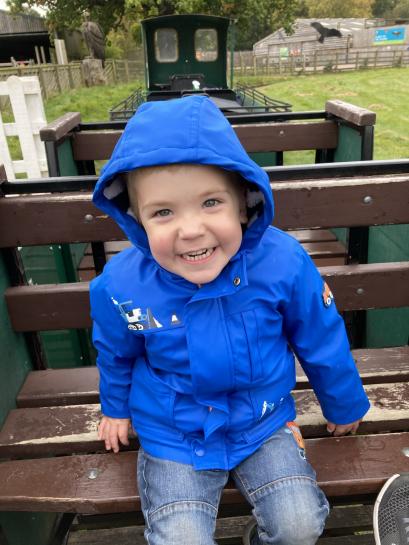 A mother has applauded Muscular Dystrophy UK for the clear information provided by the charity when her three year old son was diagnosed with Becker muscular dystrophy last August.

Kerry, a child-minder, described the shock when following over a year’s tests and delays the family were finally told, at Alder Hey Hospital, what the symptoms Rory had shown meant.

From when Rory was 18 months old and until he was three, I constantly sought answers for the weakness I could see in his development. Several clinicians said he was fine and one even told me I was being neurotic. But I have professional knowledge about children and with another child (Thomas is aged 7) I was aware of what normal development looks like.

We were only allowed one person into the hospital for the diagnosis and I had to relay the news to my husband in the car park. This added to the difficulty.

However, as part of the diagnosis the paediatrician told me to go the the MDUK website and that was a life-saver. We had just three weeks to prepare his school, who had not previously had a child with muscular dystrophy, for Rory’s arrival. The MDUK information enabled us to inform them about what to expect. It was brilliant.

Rory has settled well into school and his big brother is his biggest supporter. He is popular with his classmates and has made lots of friends.

In October we received our first wheelchair. It was heart-breaking and a huge relief all at the same time because it gives Rory more freedom and it also saves our poor backs!

When you have a muscle-wasting condition or if you are assisting someone who has, it is vital to get the correct information and advice. MDUK is here to help you get the support and care you need, wherever you live.

Whether you want to know more about a condition or about the practicalities of living with a muscle-wasting conditions, we’re here for you.

We offer a personal support system for people at their point of need, with a specialist helpline and free information. Last year we responded to more than 25,000 requests for help.

Find out more about our care and support and see some video examples of people we have helped.