What is exon skipping and how does it work?

In order to explain the concept of exon skipping, it is first necessary to explain how genes work and how mutations in the dystrophin gene can cause both Duchenne and Becker muscular dystrophy.

A gene is a section of DNA that contains the instructions for the production of one specific protein. Proteins are essential parts of cells and play a role in every process occurring within the cell, as well as having structural or mechanical functions which help maintain the cells’ shape. It is estimated that we have about 25,000 different genes.

Genes are divided into sections called exons and introns. Exons are the sections of DNA that code for the protein and they are interspersed with introns which are also sometimes called ‘junk DNA’. The introns are cut out and discarded in the process of protein production, to leave just the exons. The dystrophin gene is our largest gene- it has 79 exons which are joined together like the pieces of a puzzle. 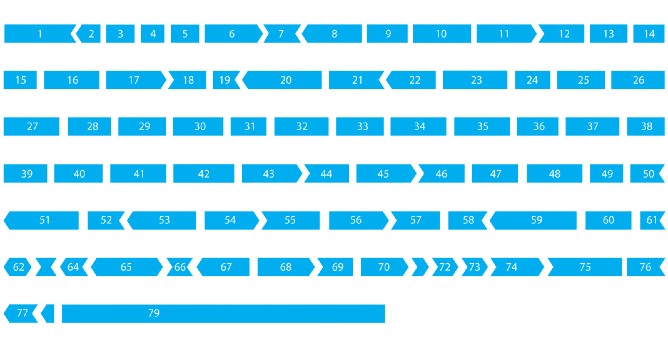 What happens in Becker muscular dystrophy?

In Becker muscular dystrophy an exon is deleted, for example exon number 74 in the diagram:

Although a part of the gene is missing, exon 73 can join up with exon 75, and the puzzle can be completed to the end of the gene:

What impact does a Becker mutation have on the dystrophin protein?

A man has even been known to be still walking at 61 years of age, despite having a deletion of 46% of the dystrophin gene!

What happens in Duchenne muscular dystrophy?

In Duchenne muscular dystrophy an exon, or exons are deleted which interfere with the rest of the gene being pieced together. In our example (using exons 50-57), exon 52 illustrates this:

Exon 51 can not join up with exon 53, which prevents the rest of the exons being assembled. For the dystrophin protein to work it must have both ends of the protein. Therefore, this mutation results in a completely non-functional dystrophin protein and the severe symptoms of Duchenne muscular dystrophy.

How can exon skipping help?

As the name suggests, the principle of exon skipping is to encourage the cellular machinery to ‘skip over’ an exon. Small pieces of DNA called antisense oligonucleotides (AOs) or ‘molecular patches‘ are used to mask the exon that you want to skip, so that it is ignored during protein production. In our example, if we use a ‘molecular patch or plaster’ designed to mask exon 53:

Exon 51 can now join up to exon 54 and continue to make the rest of the protein, with exons 52 and 53 missing in the middle:

Does this really work?

Will it work for everyone with Duchenne muscular dystrophy?

It is thought that skipping one or two exons would be able to treat around 83% of the genetic errors causing Duchenne muscular dystrophy.

Will the same ‘molecular patch’ work for everyone?

No, the dystrophin gene is very large and the genetic errors associated with Duchenne muscular dystrophy occur in different places along this gene. There are however some common areas for mutations and initially ‘molecular patches’ will be made for these. For example exon 51 skipping would be applicable for around 13% of boys. Once the technology has been shown to be effective for a particular error it will be possible to design other ‘patches’.

Are ‘molecular patches’ a cure?

Scientists hope that this type of therapy will halt the progression of the symptoms of Duchenne muscular dystrophy. It will not be a cure but may lessen the symptoms. If proven to be effective, this treatment would need to be repeated regularly- how often will become apparent during clinical trials.

If you have any questions, please get in touch with research@musculardystrophyuk.org