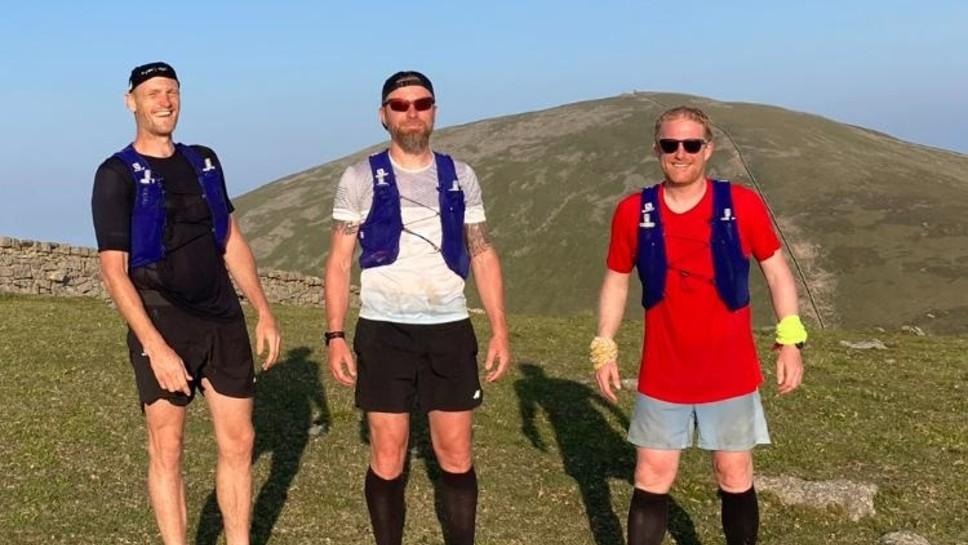 The Dragons Back Mountain race is a six-day challenge over 380 kilometres, climbing more than 57,000 feet over the Welsh mountains.

Three Northern Irish rugby players hope to raise £10,000 in memory of Steve's dad, David who lived with a muscle-wasting condition.

Ricky Armstrong, Nick Hatton both 41 and Steve Addy, 40, have been training since Christmas with eight-hour mountain treks.

They have done most of their training on their local mountain range, the Mournes, about 80 minutes away.

One snowy day, while we were up Slieve Binnian we agreed we should raise money and awareness for the condition which killed my dad, David, my cousin Peter and is a daily struggle for Peter's mum, my Aunt Helen. This is Myotonic muscular dystrophy.

We don't really know the Welsh mountains and the pandemic has prevented us from doing a 'recce.'  Most people who are doing the race have done as they live close by or at least on the mainland. But we have enough experience navigating and we will have good GPS gadgets and maps.

This race started in 1993 but was then deemed too hard and did not happen again until 2012 when it was picked up. It has since happened every two years since. Around 450/500 competitors start with only one third finishing (and that is with good weather.)

The three men have been close friends since schooldays, all three played rugby for Bangor 1st XV for over a decade. Nick works in IT, Ricky is a financial advisor and Steve is a senior council manager. They are all married and each has two children.

No strangers to fundraising challenges, between them they have raised over £30,000 for Northern Irish charities. They have run the Belfast marathons and they did the New York marathon together in 2018, raising £6,000. Steve is very much the leader of this expedition. Ricky is the logistics man and Nick is the fitness and food expert.

We were all pretty decent rugby players in our day. I am currently President of Bangor Rugby Club and all three of us are still active club members.

The 10 months of training we have had bonded us through our different roles and we will be doing this race as a strong team. If any of us were doing it alone I don't think we would finish.

David Addy was Ulster's top table tennis player. He received international recognition as a notable attaching player by competing for Northern Ireland at the Commonwealth Games in Cardiff in 1977.

You can read more about the challenge and support Nick Ricky and Steve here.

Rugby club photo. Ricky holds the ball, Steve is beside the youngster and Nick is 3 in from the right on the middle row.

The Dragon's Back challenge is a wonderful example of people getting involved in the current 'Do Something for MDUK' campaign.

Why not read more about it and sign up here